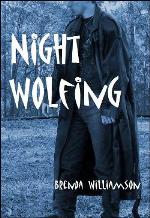 
Etta has always known something was different about herself, aside from her empathic powers. It’s not until one dark night, while walking home that she connects with the stalker in her dreams. Dimitri Sloan wants her body and soul, and strangely she wants him in the same way, including a taste of his blood. Except, his bizarre claim to them being something called blood wolves has her hovering on the edge of disbelief. Can they really have similar characteristics as werewolves and vampires?

If not for her strong intuitive nature, Etta would have label Dimitri a lunatic. However, her sexual desires are all encompassing of her thoughts. Soon she’s acting with animal aggressions scratching, biting, and drinking blood—night wolfing, as Dimitri calls it. But one exhilarating night of primitive sex doesn’t hold back the obsessions of a blood wolf. And Etta has to face the threat to know whether her bonding with Dimitri can last forever.