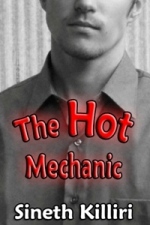 
On a trip from Chicago to Florida for some fun and relaxation, professional photographer, Kyle Barrows’ car breaks down in a rural town in Alabama. He never dreamed his fun would come at the hands of the hot mechanic Larkin MacAvoy. Muscular, hairy and domineering, Larkin is a one-night stand that Kyle wishes could become something permanent.

Larkin has been in a bad mood for some time. When pretty boy, Kyle shows up complaining about his car problems, Larkin wants to ignore him. But the clean-cut, boy next door good looking fellow with the puppy-love expression turns him on and he takes Kyle home for a night of passion that awakens him to the idea of falling in love.