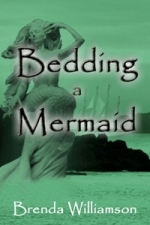 Bedding a Mermaid, by Brenda Williamson


When Nerina, a beautiful and adventuresome mermaid rescues a friend from the fish net of a ship, she’s surprised to see a merman on board the vessel. Sneaking onto the ship and seducing him, she discovers he thinks he’s human.

The son of a nobleman, Daire prefers the sea to the lavish parties at his castle. When he wakes from a night of passion with a mermaid in his captain’s cabin, he’s devastated to find Nerina is gone.

At his mother’s springtime ball, Daire is surprised to find Narina. She beguiles him with her sensuous presence and leads him to the sea with an incredible story about him being a merman. He can’t help wonder if the myths aren’t true—that enchanting mermaids really do lead men to their death in the sea?