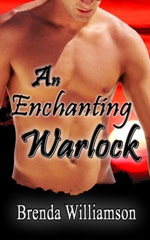 An Enchanting Warlock
by Brenda Williamson

Azrielle Marris, a young witch not fully in charge of her powers, goes out one night using the magic of astral projection and lands into danger. After crashing into an enchanting wizard, she soon finds herself in bed with the passionate lover. When he leaves, claiming they can never be together again, she's left heartbroken, and yet, hopeful that she can change his mind.

Bram Latimer is a powerful warlock and an Orion Priest from a coven in charge of Wicca law. While investigating the mysterious deaths of witches, he meets the woman meant to carry his seed. While he shouldn’t have an emotional involvement with Azrielle, Bram finds himself challenging everything he once thought was right.

But when he proves rules can be broken, he dies to protect all that he loves.